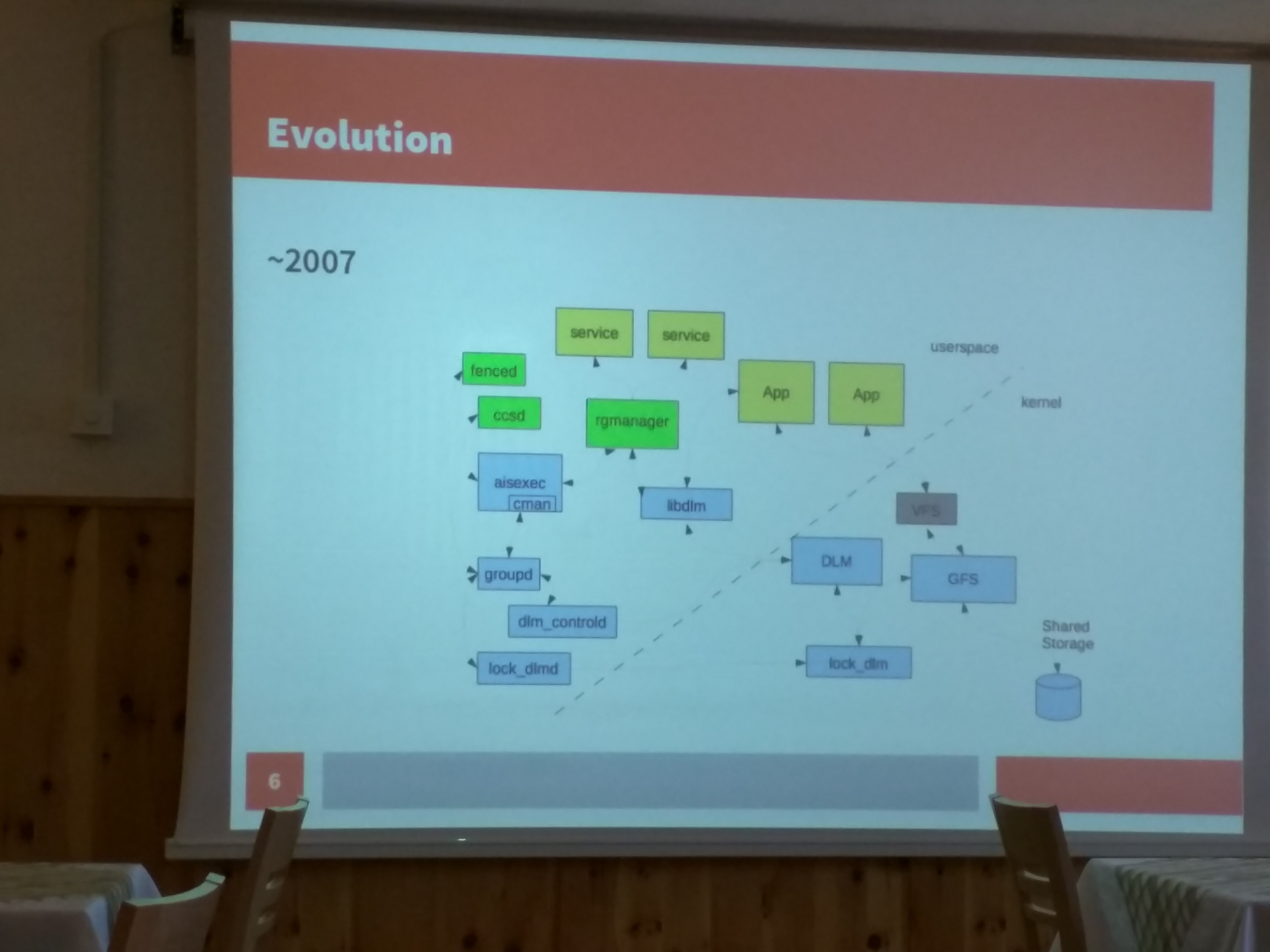 We would like to thank Stefano Martinelli for providing us with a wonderful summary about the talks during the BABS Camp 2015 this year!

Currently there aren’t free software applications for home automation but only standardized protocols for bus, channel and assigning group addresses, the fundamental parts of a smarthome architecture. Shaun built with a Raspberry-Pi an infrastructure to control light switches, monitor the opening of windows, … at home.
Each traditional device such lights, heating, alarms can be connected to a smarthome network using KNX switches. The connection between switches (bus) requires special cables, unfortunately it is not possible (or it is hard) to use the pre-existent electric or lan wiring for this purpose.
To control the devices such opening a window or shutting down a light and to read the state of the various devices you could use Python scripts. With Python you can create triggers and logics as well, for example if the door is open for more than 10 minutes send me an email.
On GitHub there is a project called SmartHome.py where you can find the documentation on how to set up the Raspberry-Pi and a lot of Python script and plugins as well, for example to send push notification to Android devices, to smart-tv, XBMC, to get the exact sunrise and sunset time based on your location and so on.
smartVISU is a framework to create a visualisation for a knx-installation with simple html-pages, it can run with a Lighthttpd web-server on the RPI.

Daniele Gobbetti: I would like to say something about homegear and Openhab
Daniele has built a different kind of smarthome implementation, using Banana-PI, a single-board computer connected to a radiofrequency controller through its GPIO-pins. This architecture allows the controlling of valves, thermostates, light switches and does not require wiring, so it is cheap and suitable for old homes as well.
When Daniele’s girlfriend leaves the home, her smartphone sends an automatic XMPP message to the Banana-Pi and the valve drives shut down the radiators; so, with some valve drives, one Banana-Pi and a 11euro radiofrequency controller, Daniele has achieved a 20% of energy saving!
There is a professional implementation of this system for about 200euro, but it does not check if the messages are successfully received, although the protocol supports ACK! If the message that should switch on again the radiators is lost, Daniele may find a cold home when he comes back from work!
www.homegear.eu suggests a more reliable solution that supports SSL Encryption for the RF-Bus as well.
OpenHAB uses the smarthome protocol and provides the software layer; it supports the XMPP Protocol allowing a smartphone to send commands and receive information. It’s written in Java, for this reason a Banana-PI with 1GB of RAM is better than a Raspberry-PI!
www.mysensors.org is a DIY-Bible for the smarthome automation, with information, APIs and a store that covers from small components to complete solutions. It is not guarenteed he has the best prices, but it gives a good starting point to know what exists.

Michele Baldessari: Linux Clusters – A short introduction
Michele does an introduction of the cluster concepts and talked about the evolution of this kind of architecture (in year 2007 was more complex and hard to mantain than today).
Quorum: the majority of active nodes take decisions in the cluster
Cluster types: A/P, A/A, N+1
Fencing: a mandatory mechanism that separates a cluster node from the resources it manages to prevent locking or data corruption if the node is faulty. Without fencing, a cluster cannot be called cluster!
OCF scripts: a recommended standard for startup/stop/… scripts in a linux cluster (OCF stands for OpenClusterFramework)
PACEMAKER: an open source resource manager software used on computer clusters since 2004. Until about 2007, it was part of the Linux-HA project, then was split out to be its own project.
In the second part of the talk he showed us a practical demontration of a linux cluster running on a virtual machine (QEMU).

Philipp Zedler: Django A better web framework
Philipp tells us how the Django framework defines and implements good design. Django is a high-level Python Web framework that encourages rapid development and clean, pragmatic design. Built by experienced developers, it takes care of much of the hassle of web development, so you can focus on writing code without needing to reinvent the wheel.
In a head-to-head comparison between Drupal and Django, Philipp showed us different approaches to common problems, such data retrieval and presentation. With Django we write less and more readable code, but a right objection comes to mind: if we (ab)use the import mechanism we may incur in a huge memory load.

Roland Kofler: Build a better product, with discrete choice experiments
Which kind of product would you buy?
Which is the key-property of a product which leads to decision (price, battery-life for a smartphone, color)?
How much a customer is prepared to pay?
A proper analytics system can give us the answer about the right direction where to focus our efforts.
If the key-property is the battery life of a smartphone instead of the pixel density, we should focus our work to produce better batteries instead of displays.
Often the cheapest price is not the right answer. For example, we prefer to pay 30$ more on Amazon that is well known, trusted and ships quickly respect to another unknown e-commerce site.
Roland talks about some instruments to make conjoint analysis, how to make the right polls and how to read the results.
This can be extended to a large number of use-cases, for example the conversions of an e-commerce site. Our customers buys always the cheapiest products or the products that are better described?

Daniele Gobbetti: GadgetBridge – How to interact with “wearable devices” using free software
Daniele bought MiBand, a wearable fitness device produced by XIAOMI that monitors activity levels, such steps, walking distance, ecc…
Analyzing the tracked data it can be understood the quality of sleep as well, for example the tracking of involuntary movements can estimate the duration of the deep sleep.
MiBand records 3 bytes for every sample (one per minute) :
1) kind of activity (light-sleep / deep sleep)
2) intensity
3) activity duration
This armband is cheap but there is a big problem, the vendor’s application is closed source and forces to create an account and transmit any of your data to the vendor’s servers! But Daniele found Gadgetbridge on F-DROID, an alternative android-market with a catalogue of FOSS applications.
This application works well but Daniele notices wrong trackings with the passing of days. The reason? MiBand doesn’t know the date because of the missing first-initialization performed only by the vendor’s official app.
Also Daniele downloads the official app, disassambled it and by reading the SMALI code found where and how to send the date to the device, submits the result of his investigation to the app developer and now Gadgetbridge performs the correct calculation.
At the moment Daniele is trying to understand how to send firmware updates to MiBand, so stay tuned on GadgetBridge@FDROID 😀

Stefano Martinelli: TouchPico (I did not bring slides but I took the projector ;-))
A live demonstration of the Touchjet Pond, a portable Pico-Project running Android 4.4.2 that turn any surface in a touchscreen.
Bought on a crowdfunding campaign on Indiegogo.

I wrote two public post on my Google Plus Profile about my TouchPico’s home-tests, everything I said at BabsCamp-2015 and something more is in the following posts and relative photo-albums:

Diego Maniacco: LibreItalia
Diego told us about The Document Foundation, the home of LibreOffice.

The link to the orignal post can be found here: https://plus.google.com/+StefanoMartinelli/posts/b9tMbNpTCgL